Learn Spanish in Barcelona, Spain's second city and one of the most famous in the world. A city of culture, history and passion, Barcelona is as popular as ever. Situated in the north eastern corner of Spain in the Catalonia region, Barcelona is positioned on the Mediterranean coast and has the ideal combination of beautiful beaches combined with a historic city centre, making it an ideal place to learn Spanish. With approximately 1,600,000 inhabitants, Barcelona is a bustling world city and a major centre for business. The area has a Mediterranean climate with warm summers and mild winters.

Our partner Spanish language school Enforex is located in a historic building right in the heart of Barcelona's city centre and is just a short walk from the Plaza de Cataluña square. Las Ramblas and the university are also within walking distance of Enforex. read more »
Minimum age:
16 years
Max. class size:
8
Open:
all year round
Stay in:
Apartment, Host family, Residence
Course period:
1-36 weeks, 1 week from €234

Our partner school Expanish is located in the neighborhood of Eixample in Barcelona, just  one block from the famous La Pedrera building. The area is full of incredible restaurants and within walking distance of Sagrada Familia and a short ride to the beach. read more »
Minimum age:
16 years
Max. class size:
12
Open:
all year round
Stay in:
Apartment, Host family, Residence
Course period:
1-24 weeks, 1 week from €195 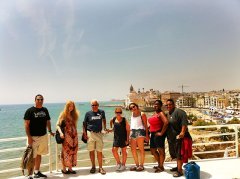