Learn Spanish in Madrid, the sparkling capital and largest city of Spain. Home to culture, style and history, Madrid is one of the most famous cities in the world. Madrid has a population of approximately 3 million with a further 2 million in the surrounding region. Besides, a whirlwind of culture, glamour, history and language. Although it has a modern infrastructure, Madrid has maintained its historic look and feel of years gone by. Architectural points of interest include the Royal Palace of Madrid, the Teatro Real, the Buen Retiro park, the 19th century National Library and the Prado Museum.
read more »

Learn Spanish in Madrid at our partner language institute, Enforex. Founded in 1989, Enforex is located in a historical building in the heart of Madrid city centre, close to all the bus / coach connections and only a 5 minute walk from the university and the Plaza de España. read more »
Minimum age:
16 years
Max. class size:
16
Open:
all year round
Stay in:
Apartment, Host family, Residence
Course period:
1-36 weeks, 1 week from €234 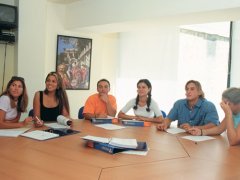