Learn Spanish in one of the language schools in Seville, the capital of Andalusia and the fourth largest city in Spain, with a population of just over 1 million people. The city is one of the warmest in Europe with an average annual temperature of 18 degrees and a pleasant Mediterranean climate. The winters are mild with January the coolest month and the summers are very warm with temperatures often exceeding 40 degrees. Seville is a very old city, with its history dating back more than 2 thousand years. Having been under Roman rule for a considerable period, the city was taken by the Moors in 712 and it became an important Muslim centre of Andalusia. The city remained under Spanish rule under 1248 when it fell to Fernando III. During the Spanish Civil War, the city fell to General Franco’s troops in 1936 due to its proximity to Morocco and the invasion force that came from there. Today the city is a hotbed of culture, elegance and tradition and is why many people choose to come to the language schools in Seville.
Language Schools in Seville
Culturally speaking the Seville region is very attractive and is famous for its fiestas, the two most well-known being Semana Santa (Holy Week) and La Feria de Sevilla (The Seville Fair). The processions during Semana Santa are internationally renowned, the women traditionally wear Flamenco dresses and the men wear their best attire, and so would be a great time to choose to learn Spanish in the language schools in Seville. The city is also centre for Gastronomy, with the majority of the cuisine based on local produce, including seafood and olive oil and the popular local Sherry which is exported worldwide. Seafood tapas are incredibly popular and are served everywhere, and who could forget the famous Seville oranges which are used to make delicious marmalades.
Would you like to attend one of the Spanish language schools in Seville and require further information, or would you like to find out more about StudyTravel? If so, please follow this link or contact us via the following telephone numbers:
Call FREE from the UK: 0808-2348578
Call FREE from the USA: 1-866-864-4489
read more » 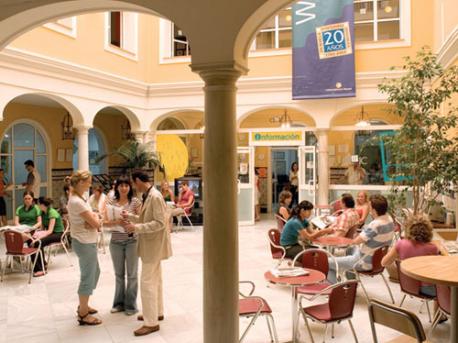 Language courses for Adults at CLIC

Learn Spanish in Seville at our partner language school, CLIC, which is situated in the centre of Seville within a few minutes walking distance of the cathedral and the town hall. The school is a Sevillian mansion with excellent modern facilities.                          read more »
Minimum age:
17 years
Open:
all year round
Stay in:
Apartment, Host family, Private apartment
Course period:
1-36 weeks, 1 week from €205 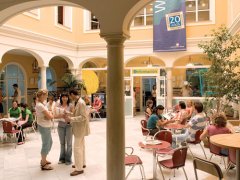