Learn German in the language schools in Regensburg, a superb city in the south east Bavaria region of Germany. Regensburg is located to the west of the picturesque Bavarian Forest and the medieval centre is a designated UNESCO World Heritage Site. The city is one of Germany’s most historic and has so many interesting sights and old architecture for you to enjoy whilst you go to the German language schools in Regensburg. The Regensburg Cathedral, which is dedicated to Saint Peter, is the most important landmark of the city and is a prime example of the typical Gothic architecture found all over southern Germany from this period. The Stone Bridge, built 1135-1146, is a landmark in stone bridge building, having been crossed by the Knights of the 2nd and 3rd Crusade on their way to the Holy Land.  All of these classical features contribute to the charm and splendor of the place.

Language Schools in Regensberg
We offer you the chance to learn German in one of the best language schools in Regensberg, Horizonte. The city of Regensberg is home to a relatively large student population thanks to the University of Regensburg, which is the fourth largest in Bavaria. Pope Benedict XVI was the university’s most famous professor having taught there from 1969 to 1977. Regensburg has a varied selection in terms of nightlife, from up-market, trendy nightclubs, to traditional German pubs and bars making it a perfect place to attend to the language schools in Regensberg. The Irish Harp, located adjacently to the Stone Bridge, is a beautiful pub with live music everyday and a very traditional feel, whilst Hemingway’s, Orphee and Kaminzy are three of the city’s popular and lively bars enjoyed by a younger audience. A little bit of exploration will have you seeking out new haunts in no time – and making new friends in the process!
Would you like to attend one of the German language schools in Regensburg and require further information, or would you like to find out more about StudyTravel? If so, please follow this link or contact us via the following telephone numbers:
Call FREE from the UK: 0808-2348578
Call FREE from the USA: 1-866-864-4489 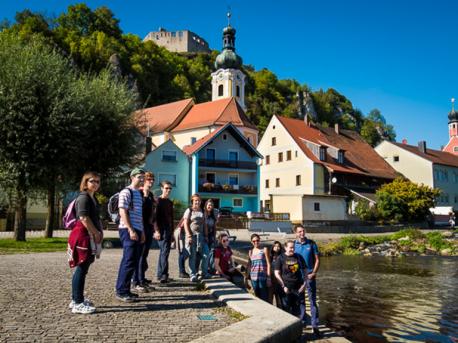 Language courses for Adults at Horizonte

Learn German in Regensburg at our partner school, Horizonte. Founded in 1986, Horizonte has earned an international reputation through its high standard of teaching and its personal and friendly working ethos. The friendly language professionals are highly qualified and experienced in giving German courses to foreign students. The school’s location is ideal, with the city’s landmarks very close by, as well as numerous cafés, restaurants and shops. read more »
Minimum age:
17 years
Max. class size:
10
Open:
all year round
Stay in:
Apartment, Host family, Private apartment, School residence
Course period:
1-36 weeks, 1 week from €220