Learn Italian in the language schools in Pisa, one of the most important and beautiful cities in Tuscany. Situated on the right side of the mouth of the Arno River, Pisa is one of the most touristic and historical cities in Europe. With 100,000 inhabitants, of whom 60,000 are students, this medium-sized city has a real flair and fantastic student atmosphere which visitors wanting to take Italian in the language schools in Pisa will instantly discover once they leave the main tourist area of the city. The Italian language was infact born in Tuscany and the Pisan accent is considered by many to be 'il piu bello italiano del mundo', making the city the perfect destination to learn Italian. Although the Pisa is most famous for its leaning tower, you will find that the city itself has so much more to offer than just its most famous attraction. Pisa is split into 4 historical quarters, one of which is the Campo dei Miracoli which is a UNESCO World Heritage Site and contains the magnificent cathedral Il Duomo di Pisa, the leaning tower of Pisa and the Baptistry. As you walk through Pisa's historical centre, you will be given the impression that you’ve travelled back in time to the medieval times or the Renaissance, an impression you’re not likely to see in many other places around the world. Aside from the Piazza dei Miracoli there are many other interesting places in Pisa which are worth a visit including the Chiesa della Spina and the tower of Guelfa, from which you’ll have a breathtaking view over the city.

Language Schools in Pisa
Take an Italian course in one of the best language schools in Pisa, Istituto Liguistico Mediterraneo. Pisa's Marina di Pisa and Tirrenia distrcts also have various wonderful beaches where you can relax and enjoy your free time. During June, Pisa holds several traditional festivals which students can enjoy, including the Luminara festival on June 16th in which more than 10,000 candles are lit along the river Arno at sunset. On the last Sunday of June, the Gioco del Ponte (Game of Bridge) event is staged, which includes a battle between two neighbourhoods of the city over Pisa's main bridge. During your time learning Italian in the language schools in Pisa, you’ll have the opportunity to enjoy delicious Italian pastas and the traditional Mediterranean food (olive oil, fish and fresh vegetables). If you choose attend the Italian language schools in Pisa, you will find that the city is easily reached from many European and non-European destinations via it's international airport, Galileo Galilei.
Would you like to attend one of the Italian language schools in Pisa and require further information, or would you like to find out more about StudyTravel? If so, please follow this link or contact us via the following telephone numbers:
Call FREE from the UK: 0808-2348578
Call FREE from the USA: 1-866-864-4489 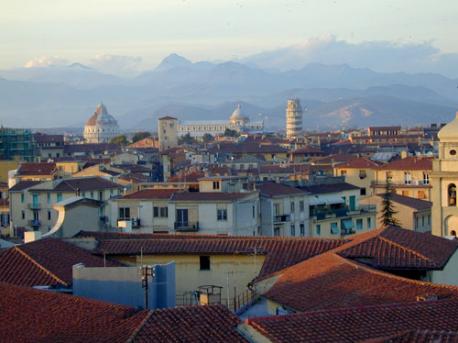 Learn Italian in Pisa at our partner school, ILM. Located in the centre of the city, ILM is a medium-sized school with a cosy and personal atmosphere. The goal of ILM is to make the students feel at home and allow them to easily integrate into the social life of the school and the city. From April until September ILM also has a second building in the seaside resort of Viareggio. read more »
Minimum age:
16 years
Open:
all year round
Stay in:
Apartment, Host family
Course period:
1-24 weeks, 1 week from €250