Learn German in the language schools in Münster, a charming city in western Germany. Münster is home to more than 30,000 students and has a lovely relaxed feel. The University of Münster was established in 1780 and is now a major European centre of excellence in research and education with large faculties in humanities, theology, the arts, sciences, business and law. Most of the city’s sights and sounds are located within the old town, which is encircled by the promenade. There are a number of appealing sights that you will see when you take German lessons in the language schools in Münster, many of which date back hundreds of years. St. Paul’s Cathedral built in the 13th century is a combination of late Romanesque and early Gothic styles and has been completely restored following the damage sustained during World War II, and includes an astronomical clock from 1540 with hand-painted zodiac symbols tracing the movement of the planets playing a glockenspiel melody every noon. The Prinzipalmarkt is the city’s central marketplace and has a 14th century Gothic town hall whilst the Schloss Palace built 1767-1787 is another example of fine Baroque architecture and is now the administrative centre for the university. There is also a variety of museums that deserve a visit, most notably the University Geology and Palaentology Museum, the Pablo Picasso Museum of Graphic Art and the Westphalian Horse Museum. When you go to the language schools in Münster, you will see that it has great nightlife catering for everyone, especially moderately priced cafés and pubs, as well as a selection of nightclubs. Most venues are situated in the centre close to the Schloss, with the style of music varying from one day to another, as does the selection of drinks on offer!

Language Schools in Münster
We offer you the chance to study German at one of the best language schools in Münster, Kapito Sprachschule. When you go to the language schools in Münster, you will notice that Beer gardens are very popular in the summer and are a traditional German pastime. The largest and best-known beer garden in the city is Kruse Baimken which has a Bavarian feel to it. If it is too crowded the Café Uferlos has a good atmosphere and also shows live sporting events on a big television screen. At the weekend you can take an excursion into the lovely countryside around the city or visit one of the nearby conservation areas or historic castles with their protective walls and moats. Furthermore, Cologne, Hamburg, Berlin and Amsterdam are only a few hours away by train and make up a perfect weekend excursion thus making the language schools of Münster an ideal place to learn German.
Would you like to attend one of the German language schools in Münster and require further information, or would you like to find out more about StudyTravel? If so, please follow this link or contact us via the following telephone numbers:
Call FREE from the UK: 0808-2348578
Call FREE from the USA: 1-866-864-4489 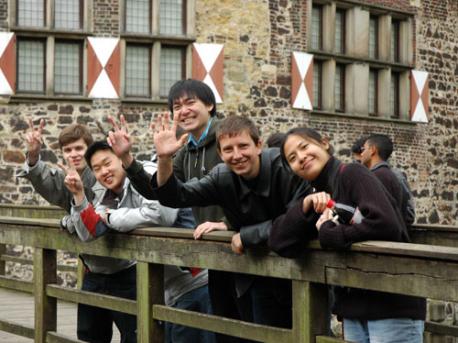 Learn German in Münster at our partner school KAPITO. Located in the middle of the city, KAPITO has large, bright classrooms which are also available as a meeting place for the students outside of lessons. The courses on offer are attended by 150 students in the summer and between 60 and 80 during the rest of the year. Some students stay for 2 or 3 weeks, many for 3 to 6 months and a few stay for up to a year for professional reasons, in preparation for a university degree in Germany for example. read more »
Minimum age:
15 years
Max. class size:
2
Open:
all year round
Stay in:
Apartment, Host family
Course period:
1-36 weeks, 1 week from €200 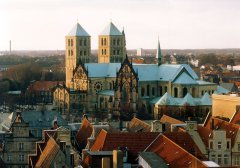