Ravenna is a city in the Emilia-Romagna region of Italy, connected to the Adriatic Sea by a canal. Today there is a population of approximately 150,000 inhabitants and is the second largest commune in terms of land area in Italy. The area prospered greatly under Roman rule. In the 2nd century, Emperor Trajan built a 70 km long aqua duct and in 402, the capital of the Western Roman Empire was transferred from Milan to Ravenna by Emperor Honorius, primarily for defensive purposes as the city was surrounded by swamps and marshes and gave easy access to imperial forces of the Eastern Roman Empire. In much later history, the region was controlled by Venice before being controlled by the French Cisapline Republic. It was returned to the Pope in 1814 and occupied by Piedmontese troops until 1859, when the area became part of the new Kingdom of Italy. The city has numerous historical attractions and impressive architecture. The ancient Spirito Santo church has maintained its original lines from the 5th century and was originally an Arian temple. The St. Francis basilica, which was rebuilt between the 10th and 11th centuries, housed the funeral ceremony of Dante Alighieri in 1321. The poet is buried in a tomb annexed to the church, with the local authorities resisting all demands of the return of the remains back to Florence. Also, the historic Neonian and Arian baptistries date back to the 5th century and very are impressive designs.

Study Italian in an international language school in Ravenna
With Ravenna being located close to the Adriatic Coast it gives tourists and students the option of visiting the sandy beaches where they can sail, water-ski or scuba dive. As well as the partner school there are numerous water sports clubs in the area that cater for foreign visitors. If you choose to study Italian in Ravenna, you will find that it is easily accessible from Bologna airport by regular bus and train links. It truly is a very attractive city. 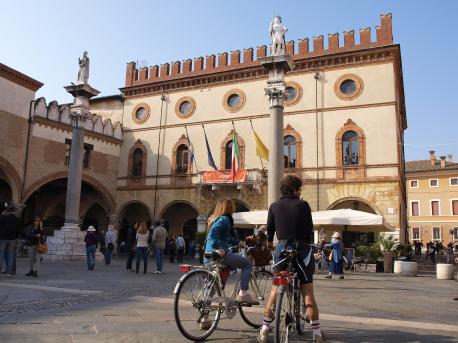 Learn Italian in Ravenna a our partner school, Palazzo Malvisi. Situated in the historic city centre, Palazzo Malvisi is located in a recently renovated building. The school is run by a friendly team of staff who encourage a relaxed but professional atmosphere. read more »
Minimum age:
16 years
Max. class size:
8
Open:
all year round
Stay in:
Apartment, Host family, Private apartment
Course period:
1-32 weeks, 1 week from €260