Study Italian in Naples, the historic capital of the Catania region of south-central Italy. The city is one of the Italy's most deeply-routed cities in tradition, especially gastronomy, history and art, making it an ideal destination for students who would like to discover Italian culture as well as study Italian in Naples. The historic centre of Naples is also listed by UNESCO as a World Heritage Site. The city has a population of approximately 1 million inhabitants, but a much larger metropolitan population. The city's metropolitan area is the second greatest in Italy and one of the largest in Europe. Lying on the beautiful Mediterranean coast, the city was founded between the 7th and 6th centuries BC by the Greeks and was given the name Neapolis, the Greek for "new city". The region was dominated for a period by the Romans, but maintained its customs and Greek language. After the Roman period, the city was dominated by many different groups, including the Normans, Goths and Aragonese. Today the traces of these historic groups can be found in the architecture and culture of the city, which contribute to its popularity.

Study Italian in an international language school in Naples
When you come to study Italian in our language school in Naples you will see that the city and surrounding region's cuisine is one of the most famous aspects of the culture. Naples is the traditional home of Pizza, with the two classic local pizzas being Marinara and Margherita, which is named after Queen Margherita who was served the dish during a visit to the city in 1889. Traditionally the pizzas were cooked in a wood-burning oven. A local Easter speciality is casatiello, a ring shaped salty cake with salami inside and whole eggs on the top. Aubergines also take common place in Catanian cooking, and are fried, grilled and eaten as a vegetable side dish. The city has its own international airport, which makes travel to and from the city straightforward. It is also the most important airport in southern Italy based on the amount of traffic, with roughly 140 flights arriving or departing on a daily basis. Naples also has a good public transport service which links the city with the surrounding region and the rest of Italy. 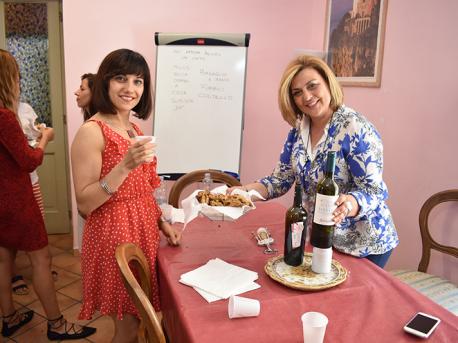 Learn Italian in Naples at our partner school, Centro Italiano. Centro Italiano is positioned in the heart of the historical centre and close to the university. The school is run by an excellent team of friendly teachers who have a long experience in teaching Italian as a foreign language. read more »
Minimum age:
18 years
Open:
all year round