Study French in Annecy, a beautiful French city situated in the Rhône-Alpes region of eastern-central France. The city is positioned on the shores of the wonderful Lake Annecy 22 miles south of Geneva and has a population of a little more than 50,000 inhabitants. Due to the city being located in between Geneva and Chambery, it's history has been strongly influenced by these two cities. Annecy started out being the capital of the county of Geneva before being integrated into the House of Savoie in 1401. During the French Revolution, the Savoy region was conquered by France and consequently the city became attached to the 'département' of Mont Blanc, of which Chambery was the capital. It was returned to the House of Savoy after the Bourbon Restoration in 1815 and when Savoy was annexed by France in 1860, it became the capital of Haute-Savoie, a new 'département'. Today, the city still exists as the capital of the region and maintains the passion and sophistication from years ago.

Study French in an international language school in Annecy
Annecy's beautiful lake is of great interest to visitors, who flock to the lake each summer to relax, swim and enjoy sailing. With the lake being backed by the Alps it is visually very beautiful and is a very peaceful place during much of the year. Some of the most popular ski resorts are within driving distance. Apart from skiing, there are numerous other outdoor activities to enjoy in the immediate vicinity. These include hiking, mountain biking and climbing, and sailing and waterskiing on the lake. Switzerland and Italy are also located close-by and are ideal weekend excursions for you to take if you choose to study French in Annecy. The city is one with a lot of character, combining traditional architecture with new and modern features. The old part of the town with its winding streets and narrow canals still maintains a medieval feel whilst the newer quarter has a number of attractive museums bars and restaurants. The region is served by excellent bus and train links from most of France's major cities. Internationally through Geneva is the quickest way to Annecy, but there is also a high-speed train service from Paris which takes 3.5 hours. 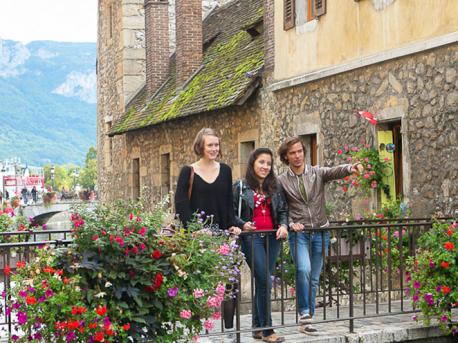 Learn French in Annecy at our partner French school in Annecy, IFALPES. IFALPES is situated in the heart of of the city, close to shops and restaurants. It is very closely located to the bus and train station (2 minutes walking) and a aproximately 10 minutes walking distance from the lake. In summer there are some 250 students in the school and 170 on average in the rest of the year. More than 45 nationalities are represented in this school, so that you can enjoy the French culture in Annecy as well as the international air in the school.   read more »
Minimum age:
16 years
Max. class size:
15
Open:
all year round
Stay in:
Host family, Residence
Course period:
1-40 weeks, 1 week from €310 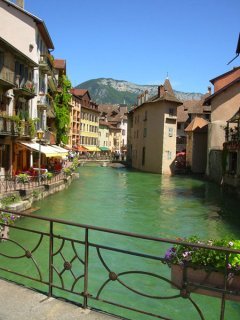