Situated in the centre of Andalusia in the south of Spain, Cordoba is a charming city with a population of approximately 350,000 people. The language schools in Cordoba are a fantastic destination to learn Spanish and enjoys a Mediterranean climate, with hot summers and mild winters. Cordoba forms part of the famous Andalusian triangle (Cordoba, Seville and Granada) and lies between the Quadalquivir River and the Sierra Morena. If you choose to learn Spanish in the language schools in Cordoba you can also take the opportunity to travel and discover Andalucia, as the city makes an ideal starting point. Cordoba still bears the traces of fascinating Roman and Arabic history. Jews, Christians and Moors enjoyed centuries of mostly peaceful cohabitation in Cordoba and left glowing testimonies of their religion behind.

Spanish Language Schools
Take a language course in one of our fantastic language schools, Academia Hispanica, which offers a range of fantastic courses. The most well known example of this is Cordoba's famous Mezquita. This historic mosque, as well as the surrounding historic centre, has been placed on the list of world monuments by UNESCO. With the passage of time, Cordoba has awoken from a long “siesta” and evolved into a modern city with a large student population. The beauty of Cordoba is that it still maintains its historical and cultural roots whilst at the same time having the features of a modern city.  The contrast between these two features attracts thousands of tourists each year and is the reason many students decide to learn Spanish in the language schools in Cordoba.
Would you like to attend one of the Spanish language schools in Cordoba and require further information, or would you like to find out more about StudyTravel? If so, please follow this link or contact us via the following telephone numbers:
Call FREE from the UK: 0808-2348578
Call FREE from the USA: 1-866-864-4489 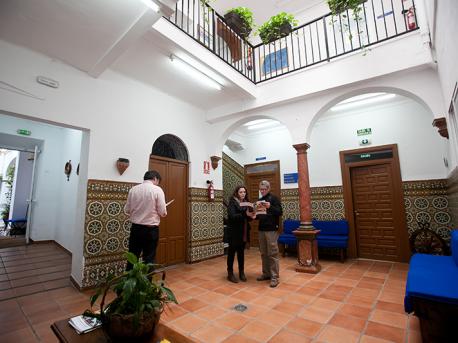 Learn Spanish in Cordoba at our partner Spanish school, the Academia Hispánica. Located on the edge of the historic centre of the city, and built in the traditional Andalusian style, Academia Hispanica is situated in a spacious two-floored building with a beautiful courtyard and terrace. read more »
Minimum age:
17 years
Open:
all year round
Stay in:
Host family
Course period:
1-20 weeks, 1 week from €239 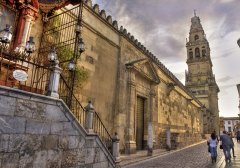